Let’s Talk About You

Struggling with the care of your elders?  Find out how our education programs and services can help you.

Long-Term Care Conference 2021 (Save the Date) 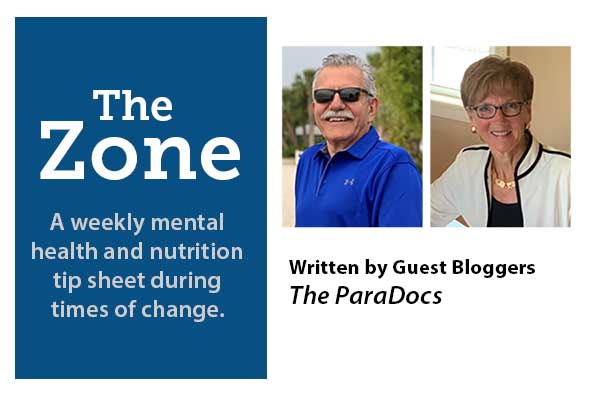 What do we do when it feels like time is standing still? We have to find ways to move forward.

In Volume 25 of this guest series, Psychotherapist, Dr. Francis L. Battisti and Nutritionist, Dr. Helen Battisti encourage us to move forward into a future we may not have expected with creativity.

For over 10 years, they have worked closely with us on aging concerns and have presented many webinars and in-person workshops. Their newsletter, The Zone, is a weekly mental health and nutrition tip sheet during times of change.

“… If your time to you is worth savin’ and you better start swimmin’ or you’ll sink like a stone, for the times they are a-changin’” Bob Dylan (1964)

Although these lyrics were penned over fifty-five years ago, their message still holds true for today.  The path for our tomorrows has been developing throughout  our lifetime and even before.  A teaching from Chaos Theory tells us that when we step back from the moment, we can begin to see patterns from the past formulating the future.

Numerous times, we have witnessed the opportunities that are present in the midst of crisis.  An example of creating one’s future is exemplified in Hall of Fame quarterback, Kurt Warner’s story.  He was cut from the Green Bay Packers in 1994 and could not find another NFL team.  Therefore, he had to take the only job he could, bagging groceries for $5.50/hour.  For the next three seasons he played in the Arena Football and NFL Europe League, striving for an opportunity in the NFL.  In 1999, he made the  St. Louis Rams and took a team that ended up in last place the year before, to be the Superbowl champs.  He brought the talents that were honed over his entire life to the field that season and for the remainder of his career, which eventually led to the National Football Hall of Fame.

In order to see the opportunities that can emerge out of crisis, the traditional approaches need to be questioned and challenged.  Waiting for everything to return to the way it was is futile.  Time moves forward, not backwards.  So that is how we must move.

In summary, we tend to think in the present rather than in a reflective sense.  This only limits our potential to take advantage of creating opportunities.  The darkness of crisis is lifted once we accept the responsibility of creating our future.

Quote of the Week

“The future is not some place we are going, but one we are creating. The paths are not to be found, but made. And the activity of making them changes both the maker and the destination.”

The paraDocs are Dr. Francis L. Battisti, PhD, Psychotherapist, Distinguished Psychology Professor and former Executive V.P. and Chief Academic Officer and, Dr. Helen E. Battisti, PhD, Registered Dietitian and Nutritionist. The purpose of The Zone is to provide a weekly mental-health and nutrition tip-sheet during times of change. If you would like to subscribe to The Zone, please email info@avilainstitute.org and we will get you on the mailing list.

The Zone, Vol 51: Down Shifting

The Zone, Vol 51: Down Shifting

The Zone, Vol 50: Movement as Self-Care

The Zone, Vol 50: Movement as Self-Care Sign up to receive our newsletter as well as announcements on new educational offerings, resources, and discounts for our email subscribers only.